After their encounter with Strahd, our adventurers made their way down the Old Svalich Road and found themselves in the village of Barovia.

As they entered, they noticed that many of the houses were locked – or boarded up – and most of the shops had been utterly ransacked. A sound of crying echoed off in the distance. After hearing some voices behind one of the locked doors, Varus knocked – keen to talk to the inhabitants of the village to learn more. A frightened, harassed looking woman appeared at the door and told them – in no uncertain terms – to get away from her property, and to stay away from the boarded up houses. Bewildered, the party continued into the village, but the young son of the woman they had spoken to raced down the street to catch up with them and told them that the boarded houses contained those who had been punished by Strahd – villagers who had joined a revolt against the dark lord a year ago and had returned to the village as shambling zombies as a punishment. The child told them that some had been punished more than others, but was called back in by his mother before he could explain any further.
As the sounds of crying intensified, they located the source at a townhouse just off the village square. After some great feats of acrobatics by Idrim and Destiny, and some equally great feats of rope climbing from Dagark, Varus and Xenia, they found themselves in a room with a sobbing woman, who was clutching a ragged sackcloth doll to her breast – known in the village as Mad Mary. After some gentle questioning, she revealed that her daughter Gertruda had disappeared – presumably kidnapped by Strahd. She showed them her doll – ‘this is all I have left of her’ – and on inspection, the party noticed a label on the doll that said ‘Is No Fun, Is No Blinsky!” – a local toymaker from Vallaki. Varus pulled out a cigar and lit up, comforting the woman in his own way – “I’m sure she’ll turn up… one way or another.” – but surprisingly, this did little to comfort the grieving mother. The way Mary talked about her daughter suggested she was quite a young child, but an investigation of the bedroom confirmed Destiny’s suspicion that the child in question was more likely a teenager – with a vanity table, mirror & makeup taking pride of place in her room. The party – still in search of a base of operations – tried in vain to convince Mary to let them stay, but despite Xenia’s best efforts to turn on the charm, Mary remained unmoved and forced them to leave.
As they returned to the square, they stopped in the one, solitary shop in village – Bildrath’s Mercantile – only to be met with a conniving price-gouging old sinner who didn’t seem interested in their business at all. They bought a few bits and pieces and were swiftly ushered out by Bildrath’s hulking nephew. They then made for the local tavern, and on the way there they were met with a rare sight in Barovia – a friendly face. A wizened old woman named Morgantha – but who insisted on being called Granny – was selling pies to hungry Barovians from a cart, and she was clearly delighted to see the party – it is not often that there are new faces in the village. She gave them all a free sample of her pies and pastries – which some of the party tried and found to be utterly delicious, especially compared to the unappetizing rations that they carried with them. The adventurers were so pleased that they immediately bought up several more – finding that they were not only delicious, but they sharpened the senses somewhat…
After this they ventured into the tavern and began to do what all good adventurers do – drink and talk to strangers. They met three colourful Vistani women who were very interested in learning all they could about the party, as well as a young man called Ismark – the Burgomaster’s son – who told them about his troubles with Strahd, who had taken a liking to his sister Ireena. Presumably he wished to make her his consort. Their father – an old man – had died of fright due to the vampire’s constant stalking of his daughter, but Strahd had not yet succeeded in luring her out of her home. Ismark enlisted the party’s help in transporting his sister to nearby Vallaki, a town that was rumoured to have protections against the powers of Strahd, which they agreed to. He offered them a night’s rest at his family home, a grand townhouse that had seen better days – but warned them that his sister would not leave the village of Barovia until their father had been laid to rest in consecrated ground.
After a restful night filled with wonderful dreams – just like Granny promised – they carried the coffin through the misty streets of Barovia to the Church of the Morninglord, presided over by Father Donavich. But Ismark warned them that the priest had not been seen for some time. On arrival, they entered the church and spoke to the priest, only to be interrupted by the screeches of his son – locked up in the basement. The party were initially concerned, until they learned that the boy Doru had been turned into a Vampire Spawn by Strahd after the peasant attack on Castle Ravenloft last year. The priest had managed to chain him in the basement, and routinely fed him – taking blood from his own arm and feeding the boy with it. He also tried several times to lay the poor boy to rest, but any time he tried anything, any wound he inflicted… the boy would recover within moments. Xenia and Destiny were horrified to hear that the boy had been turned and wanted to explore avenues of restoring him to life, but eventually accepted that he had to be destroyed to release him from this curse – as his broken father begged. 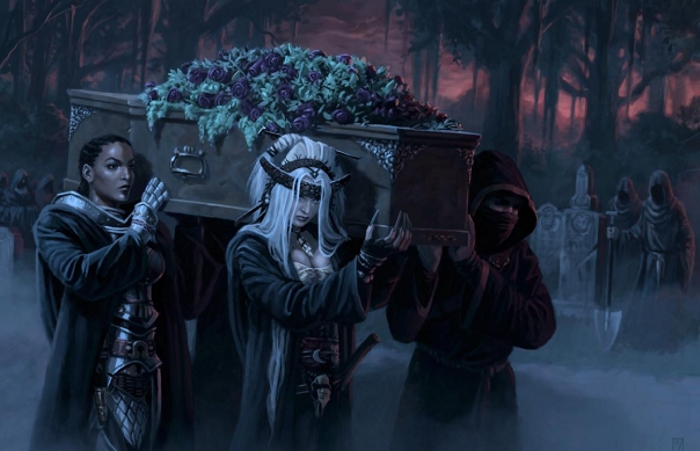 As they entered the basement, the cries of Doru grew louder and more frantic, and the scent of fresh blood drove the starving boy into a frenzy – he pulled free of his chains and attacked the party. With the combined radiant powers of Xenia, Dagark and Idrim, Doru was unable to heal from the grievous wounds the party were dealing him. The party proved too much for Doru to handle in his starved state, and a powerful Guiding Bolt from Xenia proved the final straw as the cleric bathed the vampire spawn in white-hot burning radiance, vaporising him. Before the bolt hit, the warriors could swear they saw a slight smile spread across his lips. Doru was laid to rest at last – now to do the same for Ireena and Ismark’s father…