As the party emerged from the chapel’s undercroft, having laid Doru to rest, they were met with a sombre, but grateful, Father Donavich. His son was now at peace and would suffer no more. He relayed to the party the tale of small folk’s rebellion against Strahd, how they had marched up to Castle Ravenloft but none had returned. His thoughts then turned back to his duties, to the coffin in the graveyard containing the former Burgomaster, guarded by his children Ismark and Ireena while the party explored the church. They carried the coffin out to the Indirovich family crypt and bore it inside – the priest and the man’s children started the ceremony inside, accompanied by Xenia who added prayers and blessings of her own. The rest of the party remained outside, keeping watch. Although they were supposedly on hallowed ground, they were taking nothing for granted. Sensing a great evil near the graveyard’s entrance, Dagark and Idrim went to investigate only to find Strahd waiting for them. He beckoned them closer, and then used his monstrous powers to ensnare Dagark’s mind and put him under his control, making Dagark believe that Strahd was in fact a friend and trusted ally. At the sound of this commotion, Father Donavich left the crypt to attempt to banish Strahd, telling him that the grounds of the church were consecrated and that the vampire would be unable to cross the threshold of the graveyard. Strahd disabused the holy man of this notion, explaining that the dark powers of Barovia had desecrated the very earth they walked on. They would be safe in their churches and crypts, but nowhere else. 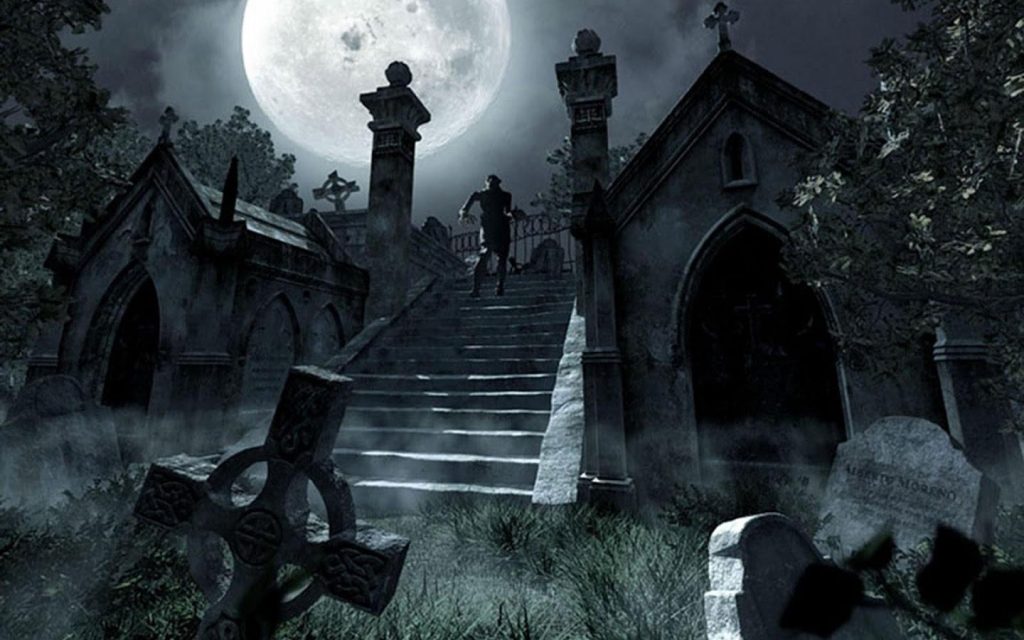 As the group pondered what to do, Varus (now seemingly armed with a rather unusual-looking arcane crossbow) went back for Pidlwick – only to find he had very merrily beheaded the unconscious shopkeeper. Varus crept into the street and affixed the head to an iron spike and managed to narrowly avoid being spotted by the town guard, led by Guard Captain Izek Stranzi. Back at the mansion, the party were pondering what to do when Urwin Martikov – owner of the Blue Water Inn – arrived, accompanied by Sylvaris Quen, the arcane merchant they had met very recently. He seemed surprised that the party would go after the Wachters without informing him, but revealed his Wareraven nature and lent his and Sylvaris’ strength to the group. Sylvaris believed that she could potentially breach the Wachters defences, and the party took a well-earned rest while she consulted her arcane tomes. After an hour or so, with little progress made, the party were interrupted by the sounds of a lute in the distance, as a wandering bard by the name of Piotr approached. He explained he had been sent by Madam Eva, who had divined that they would need some very specific help with their quest. He pulled an ornate Tarokka case from his sleeve, and selected a card which began to glow with pink arcane energy. He then whipped his hand back and threw the card through the air with uncanny aim, and arcane energy disintegrated the invisible wall of force before their very eyes, removing the barrier to entry. He agreed to join the party and aid them on their quest, as instructed by Madam Eva.
Thankfully the occupants inside did not seem to notice that the spell had ended, and the group took this opportunity to sneak round the rear of the mansion and infiltrate via the backdoor. They found themselves in a series of small cloakrooms in the servants quarters, but keen eyes noticed a secret door concealed behind cloaks and aprons, leading to a hidden basement… down the stairs, and through a trapdoor, they found themselves in a large root cellar with a dirt floor. Dagark and Idrim bounded across the floor, and found themselves set upon by several long-dead skeletons, hidden beneath the loose dirt. The party dispatched the skeletons with little problem – though not particularly quietly – and then set about searching the cellar. They found footprints which led up to a blank wall, and – suspecting a hidden door – prepared themselves for what they might find behind there. Dagark – ever the brave (or foolish?) Paladin entered first, and was greeted by the sight of a series of cultists performing a ritual, overseen by one of the vampires they had pursued earlier. A fight broke out, and Sylvaris expended some of her most powerful magic to thin out the crowd so that the party could focus on the vampire, wiping out the cultists with a vitriolic sphere of acid and stopping the ritual in its tracks. The party then did battle with the vampire – and it was quickly overwhelmed, with Varus dealing a grievous death blow from his Arcane Crossbow. Buoyed by the rescue of the bones, and the vanquishing of their foe, they felt emboldened and their power felt bolstered. They did some healing and dressed their various wounds before Martikov urged them to take the fight to the Wachters upstairs, claiming there would never be a better chance to remove this blight from Vallaki. But would the party heed his call?