Jordan had barely time to catch his breath, before the door ahead of him opened. A middle-aged, bearded human male wearing a hooded brown robe and armed with a staff and sickle appeared.  With a grim voice he spoke “I am Belak, called the Outcast. I am told that you come to talk and yet you invade my inner sanctum.” He surveyed the scene before adding “at your cost”.

Behind him was the bugbear, and two humans. One, a heavily armoured young male with a shield and sword, and the other a blonde young woman in a robe fit for a noble; each of them had black eyes and gray skin with the texture of bark, they are obviously possessed, or worse still, dead with something reanimating their corpses, a warped force of nature.

Jordan stood defiant, and when asked if he would lay down and be taken peacefully he refused, he raised his great sword in weary defiance. Belak sent in his slaves and Jordan was finally overcome. It was at this point that Jordan noticed the presence of a number of other Drow. Not too dissimilar to his own companion in appearance, they drew close and spoke to Belak in hushed tones. Belak did not seem happy with the apparent orders he was being given, but acquiesced. It appeared that the drow were unhappy that Bowelin was dead.

One of the drow, with horrific scaring down one side of his face, limped forward. You will tell us of your knowledge and dealings with the fugitive Bowelin Nurbonnis. Jordan explained that he only just met Bowelin. The drow laughed, and said he has better have a better sorry than that when the High Priestess came to question him.

Jordan was then chained and dragged into the tunnels of the Underdark by the six drow males, the rest of the group were left with the Druid who was ordered not to harm them yet, until the drow had spoken to their leader, Ilyana the High Priestess to Lloth. Belak had hoped to feed the remaining adventurers to the Gulthias tree and create more bark skinned brain dead slaves. He was not to get his way,

Jordan’s journey took ten days, into the deaths of the Underdark. The scarred drow introduced himself as Jorlan, and while the other drow were unaware he spoke quietly to Jordan, and voiced his discontent at Ilyana’s leadership. He hinted strongly that he would help Jordan escape. Jordan then took the opportunity to convince the drow to take the rest of his companions prisoner too. It would make an escape more likely, and would be more damaging to the High Priestess’s reputation, if she were to lose more prisoners.

After a few days they met with another contingent of drow including Ilyana. Jordan then witnessed Ilyana bring Bowling back to life. It seemed that Bowelin would not get away with his “crimes” quite so easily. Ilyana and her drow then took charge of the prisoners, ordering Jordan and his contingent back to the surface to aquire and bring back the rest of the adventurers. 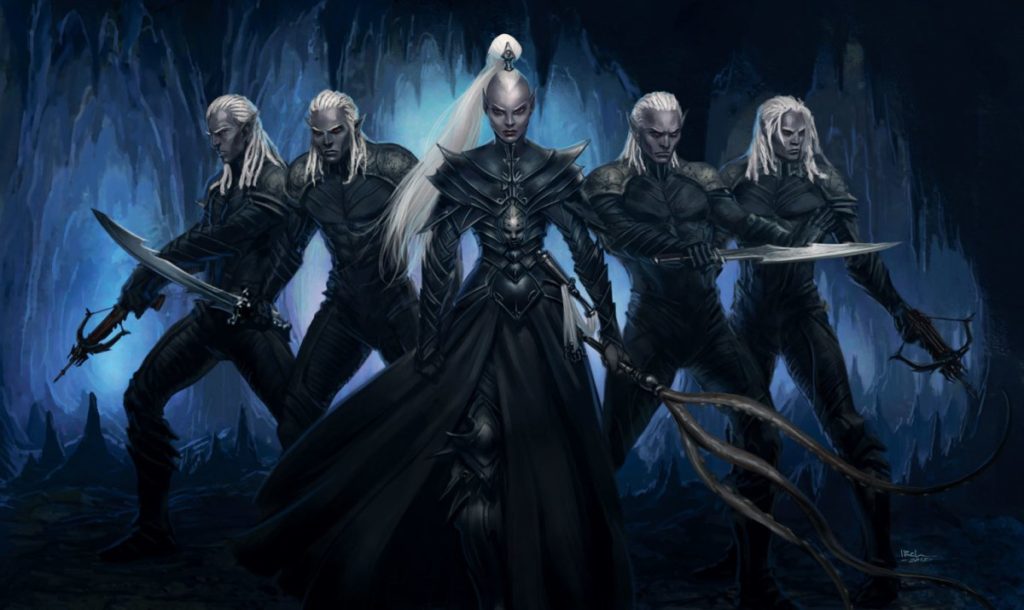 After ten days of hard march through a maze of underground tunnels and caverns, the adventurers were reunited in a Velkeneve, a drow prison camp. There there would be tortured and questioned as to what they knew of Bowling before being transported to the great dow city of Menzoberanzan, and being sold as slaves. Bowling would also return to the city and face his punishment.

Chained up around the wall of a slave pen the group found themselves amongst many unfamiliar faces.

There were ten others in a similar predicament.

Buppido, a talkative and cunning Derry.

Prince Derendil, a cursed Elven prince who now is a Quaggoth.

Jimjar, a deep gnome with a gambling problem.

Shuushar the Awakened, a Kuo-toa hermit and mystic.

Everyone kept to themselves, apart from the odd whisper. Until Silas used his telepathic ability to talk discretely. The mushroom somehow woken by these telepathic thoughts proceeded to describe it’s plight, asking for help to return to it’s home. It then went one step further than Silas and expelled a burst of spores that filled the chamber briefly leaving everyone with the ability to communicate with telepathy. Finally they were able to freely converse, get to know each other and hatch an escape plan. During the conversation the half conscious Bowelin was dragged in and chained to the wall. The party were relieved to see their friend alive but feared for his health again immediately. He had obviously been very badly mistreated.

Jordan called the guards over to the large iron gate that blocked the exit from the pen. Three drow elves arrived, angry and demanding silence from the prisoners. Jordan demanded to see Jorlan, the scarred drow, and said that Jorlan would want to see him. The drow warriors would have nothing of it though and when Jordan continued to disobey their order to be silent, they unlocked the gate and went to sort him out. Jordan drew the first of them close and launched a headbut attack, to no avail. The drow began to whip him but Jordan, still defiant continued to pull and strain at his chains, desperate to be free.

His companions would not sit by and watch him be beaten, and so begun to intervene. Mac using thorns taken from the unnatural briars in the twighlight grove and began to work on the locks to his manacles and soon had them undone. Silas and Irky did not need to be free to back up the resolute Jordan. They cast cantrips, spells requiring no components but lethal none the less. Together they killed a drow, and would continue to devastating effect. During the chaos Mac made a dash for the exit and successfully escaped onto the narrow platform over looking the ceiling of spiders webs. With no obvious way down apart from the basket to the left, he crept along the narrow platform in that direction. To his left there was another cave entrance, the door to this was ajar, and he made his way in. Inside was the den of the drow’s Quaggoth slaves, a filthy area scattered with broken bones. Four large hairy Quaggoths snored heavily within.

Back in the slave pen the adventurers were still on the front foot. Jordan had broken free of his chains, as had Ront the orc. Ront’s first reaction was to go over and kill the dwarf Eldrith, but Jordan intervened and commanded Ront to help release more of the prisoners. All three drow elves were now dead, but others were coming fast, over from the garrison stalactite in the near distance. The alarm had gone up and any escape would need to be immediate.

Silas used Magic Hand to transport the cell gate key from one of the dead drow to his own had, and gave it to Irky who by this time, with the help of Ront, was free of his chains. Irky ran to the gate and with more drow now appearing outside he locked the gate, as Silas continued to offer ranged support. It was not going well for the drow, two more dropped dead at the gate. Then the high priestess arrived. Ilvara, commanded them to stand down, and when the key was not discovered she sent soldiers to get the spare. Jordan played for time, as all those willing to risk their lives were freed from their manacles. Quaggoths has arrived outside, desperate to get inside and start ripping off some prisoner limbs. Then before more reinforcements could arrive the prisoners opened the door and charged out.

Mac during this time, covered in Quaggoth shit to help camouflage himself, had crawled upside down along the base of the platform and now was positioned directly under the High Priestess. Jordan and Ront lead the charge, and knocked two of the Quagoths off the platform and into the webbing below. Mac grabbed the priestesses leg and tipped her down on the webbing too. Jordan and Ront charged across the bridge to the stalagmite on the far end, closely followed by the rest of the prisoners.

Ilvara looked up from her fall, and saw Mac underneath the bridge, completely exposed. Using her innate levitation she rose up and whipped Mac with her multi headed snake whip. Mac succumbed to the poison, he lost consciousness and tumbled into the webbing himself. 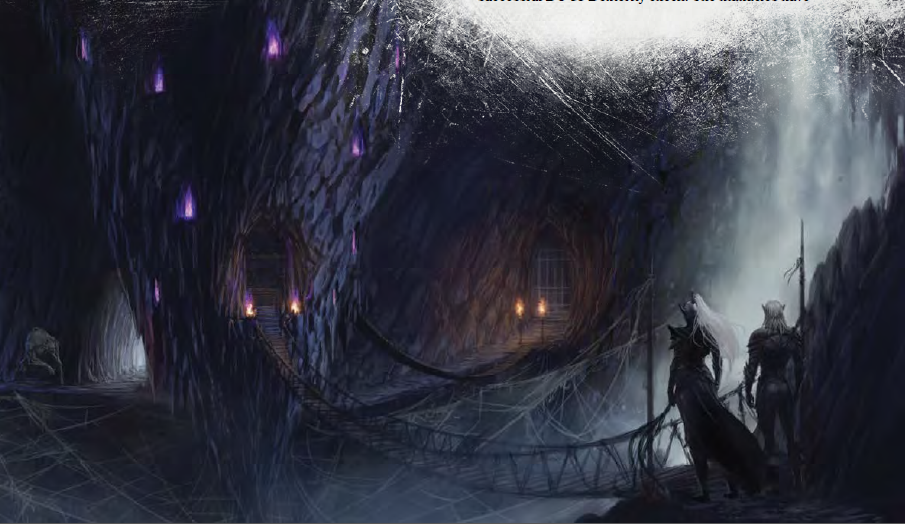 The drow, Sarith, drew Bowlein aside, and suggested that they, together, could escape now. The rest of the prisoners were dead weight. Bowelin refused, and when Sarith spat his disgust and went to leave Bowelin stopped him. Both went for weapons and began to fight. 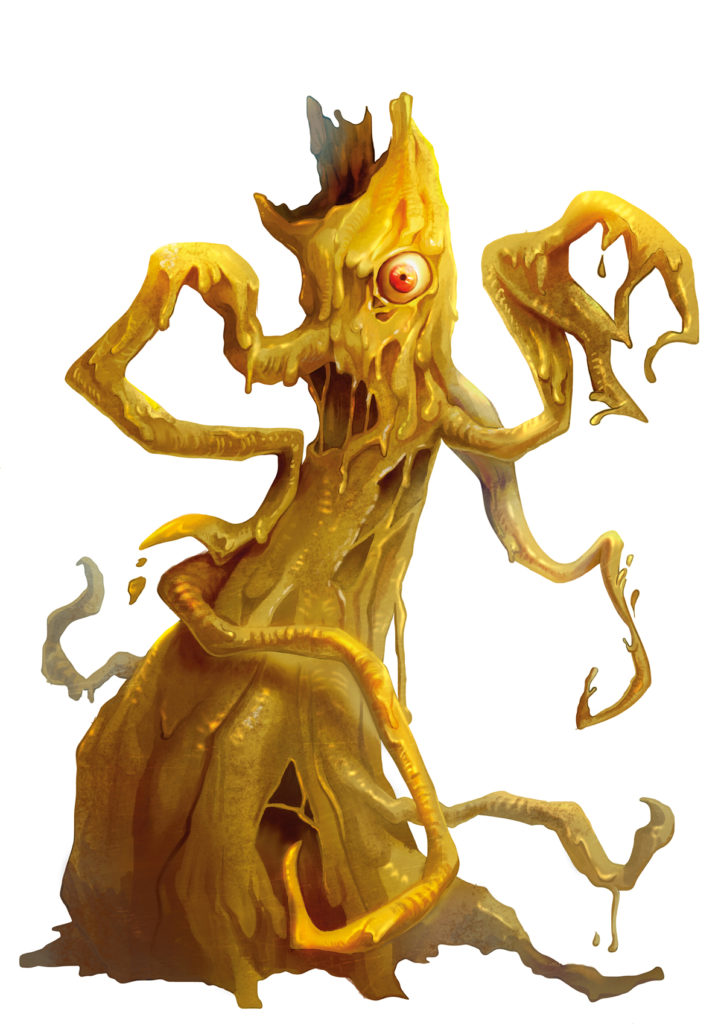 Everyone else made there way into the chamber. The two remaining Quaggoths began to cross the bridge. Joran and Irky started to cut ropes. The Quagooths lost their footing on the swaying bridge and fell to the webbing below. The High Priestess, her arms raised, then summoned a foul demon. It appeared briefly as a melting tree like ochre stick, but has soon changed into a giant spider, and raced across the bridge.

Bowelin lowered his blades and gave Sarith leave to go, but Sarith seeing that as weakness continued his attack and Bowelin was left unconscious and bleeding on the floor. Sarith raced through the exit door and across the bridge to the waterfall that dropped about halfway along. He then disappeared over the side of the bridge and into the waiting pool below. More drow appeared at the far end, assumably returning with the key. A firefight ensued, with the party  keeping them busy from a position by the exit door.

The demon, turned giant spider, was ferocious. It killed Ront the orc with a sing poisonous strike. Eldeth then stepped forward to fill the gap next to Jordan who was at least still standing. Eldeth was dead the next round. Things were getting desperate. Irky and Jordan then hatched a plan. Using rope found in the armoury Irky tied one end to Jordan, and gave the other end to Prince Durandil, the Elf come Quaggoth. Jordan then tackled the spider and leapt out of the stalactite door. They both breezed through the webbing, which was not strong enough to break their fall. Jordan released the spider and it crashed to the cavern floor far below, and Jordan was left swinging by the rope. To Jordan’s disappointment the spider was not dead, it did not look very healthy, damage had been done. But it was not dead!!!