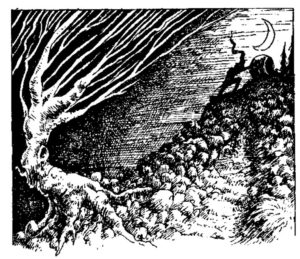 Have fun storming the castle…..Leaving the unmourned healer’s body our intrepid murder hobo’s trek on following the physical trail left by Clothilda . Defying death or worse at the hands/claws/teeth/tentacles that awaited in the mists at the bottom of a chasm they eventually negotiated a steep ice slope with a very cinematic one on one, mano…beastmano fight won by the hunter, then ambushed in the courtyard by hidden archers that were foiled by the (heavily prompted by a benevolent GM) defensive magics of the sorcerer ALL may i add WITHOUT the barbarian, warlock & a part time mystic/witch (who had homework) Will our magical mob brave the animated mud monster, the haunted? armoury OR that most dreaded of foes….multiple doors? these & other quest….ions may not be answered in the next session of DRAGON WARRIORS.