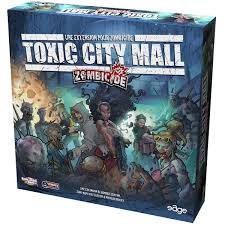 A total victory. Lessons were learned from the last attempt. That failure led to a different bunch of survivors having to hole up behind some barricades awaiting rescue. The zombies spawning couldn’t have gone more differently, with an abomination turning up early on, and a couple others joining the horde later on. Lucky for us we had someone find the weapon to deal with such behemoths. The push into the city mall occured faster than last time, we cleared such a space we were able to chase the zombies back to their spawn zones and grab the car keys neccesary to escape. Wise counsel had us usher our rescued friends away first, leaving the more powerful amongst us to push on to the last cars. With only one blip around the game mechanics of runnings things over with a car, we all drove off, many sporting wounds, but away to safety…. until next time.