The goblin cowered, and pleaded for its life. It was fortunate the party were in a forgiving mood. There was no killing blow. Seeing the possibility it could survive, the pathetic creature tried its luck.

“Ok, maybe.. We are also looking for a dragon” they replied.

The news of a Bugbear was not welcomed, but at least the goblin seemed compliant. Still uncertain whether trust a creature so evil and intent on it’s own survival, they none-the-less decided to give it a chance.

Mac took his rope and bound the goblin tightly, creating a lead around the it’s neck. The goblin now back on its feet seem to grow in confidence, even though the rope cut painfully into its skin. They all climbed over the barricade, carefully avoiding the last of the caltrops.

A corridor lead on. Mac crept forward and carefully peeked around the corner. He saw the southern part of a room. Dozens of blunted and broken arrows lay on the cracked cobblestone floor, and a few protruded from three crudely sewn, human-sized targets hung along the centre of the wall. The goblin was again questioned, he was insistent it was safe to proceed. This was their practice firing range.

Mac crept along the south wall and entered the room. He saw it extend to the north.  The furthest part of the room was separated from the south by another crudely mortared and crenellated half-wall. No caltrops were in this room but behind the barricade Mac could see that two goblins were readied, alert and in perfect position to fire arrows upon anybody entering. They had not seen Mac, but the first person they did see was sure to get it.

The adventurers were now angry at the goblin for misleading them. It cowered, and called out to its hidden brothers, promising to the group that he could negotiate their safe passage. They could not understand exactly what was being said, as none of them spoke goblinoid, but it was obvious by the tone of the conversation that the negotiation had not gone well, and so when it said, “ok, it’s safe to proceed”, they did not believe it for a second. Silas took the advantage. He entered the room and cast his life draining spell. A well aimed blast, where, even behind the barricade, the goblin could not avoid the awful death that followed. It fell to the ground, an emaciated shell. The remaining goblin took one look and fled in terror, allowing the party to enter the room and continue to the north.

Irky was feeling increasing uncomfortable with the surroundings. A door to the West looked chillingly familiar to him. They opened it, to find a low-ceilinged room. A number of small iron cages were stood within. Several sets of corroded manacles were connected to the walls, some still bound a few crumbling skeletons. Four of the cages contained desperate Kobolds, eyes wide, and panicked by the entrance of the party. Irky gasped. This was where he was once prisoner. He had been in this room for many weeks. Treated abhorrently.

Meepo was called and he identified the captured Kobolds as friends. The locks were picked and they were set free. It was immediately obvious that they were in no fit state to accompany party. So instead of braving the Citadel and making their own way back they elected to stay put and await the party’s return. The duplicitous goblin, now tied up within an inch of his life, was left in the “care” of the four kobolds, who shared a malicious grin, the goblin’s fate was sealed.

Onward then and along a new corridor, which revealed a very intriguing door. Strong and imposing it also emitted an unnatural chill. It was covered in a thin layer of frost. Jordan used his divine sense, and determined that no undead were present. They called Meepo to the fore. He confirmed that this was most likely where they were keeping the Dragon. Mac, picks in hand, set to work on the lock.

The room within was a chaotic mess. Mounted and stuffed animal heads adorned the walls. The mounting job sloppy, and the assortment of heads included cattle, rats, and other not particularly impressive specimens. A few grisly trophies shared the wall with the animals, including a couple of kobold heads. Smashed and broken cabinets and small tables littered the periphery of the room, mute victims of some sort of rampage. A rusted iron spike stood in the centre of the room, trailing a broken chain. Thin patches of frost coated sections of the walls, floor, and debris. Movement came from a behind a broken table at the back of the room, and a small(ish) white dragon showed it’s head, sniffing the air.

Advancing slowly towards the dragon’s position at the far end of the room, Meepo cooed and made other strange, slightly unpleasant, high pitched noises. Silas and Irky, who both spoke draconian could tell this was not a language in itself, but was more like how a Kobold would speak to a baby Kobold. Gross! The Dragon reacted well. Meepo appeared to be winning it over, and with confidence he edged across the room, closer and closer to the dragon’s position. Sadly for Meepo, the dragon’s mood was not as it seemed. It was cunning, and once it had drawn Meepo close enough, it roared and breathed a cone of ice upon the doomed kobold. Meepo now completely enclosed in a block of ice was blasted back down the length of the room, quite obviously dead. The dragon then broke from its position and charged the visible adventurers, who were stood at the door. Irky, quick as lightning, started to close the door as the dragon bore down. It was seriously close, but the door slammed shut. The dragon crashed into the other side. Thankfully it was a sturdy door, and more than capable of holding the Dragon Wyrmling.

Jordan’s feelings that such a cruel and dangerous creature should not be allowed to live to maturity was echoed by the rest of the group, but, as Irky then said, the priority was to find the remaining humans. They would have to come back for Calcryx, and its treasure hoard, later. So they continued along the corridor to the far end, where a southern door lead them into a long hall. Several torches mounted in crude sconces burnt fitfully around this chamber, filling the air with a haze. A double row of marble columns carved with entwining dragons ran it’s length. The sound of many goblins could be heard emanating from a door at the far end.

They reversed track, hoping for an easier encounter, or no encounter at all. Making their way along a winding corridor to the north, they came to another door, this time set into a curved wall, suggesting that this was the entrance to another of the citadel’s towers.

Mac quietly opened the door and peered in. A circular shaft pierced the floor of a forty-foot-diameter domed chamber. Dim violet light shone out of the shaft, revealing sickly white and grey vines that coated the walls of the shaft. The light was supplemented by four lit wall torches set equidistant around the periphery of the chamber. A crudely fashioned stone throne sat against the curve of the northwestern wall. A large iron chest served as the throne’s footstool. A sapling grew in a wide stone pot next to the throne. Sitting on the throne was a large hobgoblin, dressed in splint mail. He was flanked by three more hobgoblins, obviously subservient. All four were in heated conversation, something serious was being discussed. Was it a war council? Did they know that they had intruders? Over to the left of them stood a goblin, obviously bored and irritated by the bigger goblinoids, she was dressed in the primitive superstitious garb of a shaman witch doctor. The decision was quickly made to strike. Once again Silas took the lead, and along with Bowelin they pressed into the room, missile attacks both finding their mark on the seated boss Hobgoblin. With a bit more luck they would have put him down immediately, but it was not to be. The other three hobgoblins mobilised and charged the intruders, as the shaman drew a tiny vial from a pouch and administered a potion of healing to the boss. 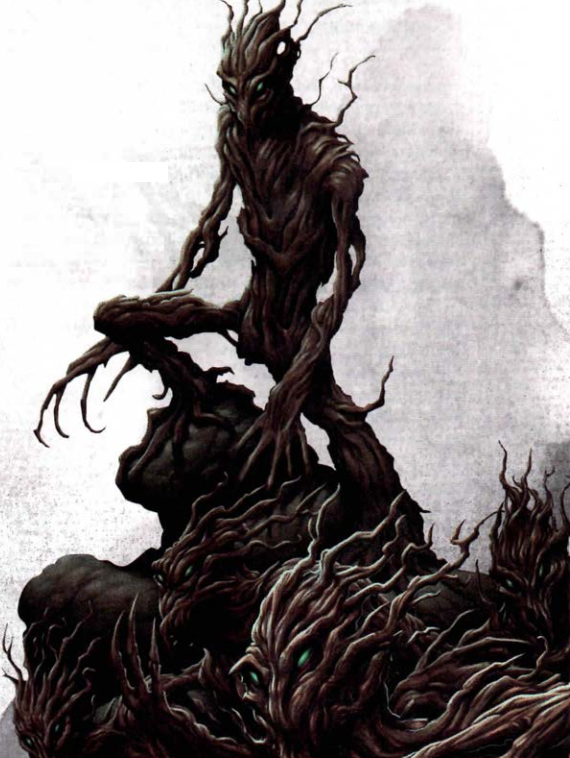 Silas and Bowelin found themselves alone in the room, with the door now blocked it meant their companions could not get in to assist. Mac found himself in a useless position way back in the corridor, as Irky and Jordan fought a heated battle in the doorway to try and break their way through. The situation for the elven pair in the room was not good. The hobgoblin boss pulled the sapling from it’s pot that stood beside him and threw it into the room. Spindly branch like arms and legs materialised from it and it tottered over to fight. The boss then followed along with a pair of his henchmen.

This was not going well, and Silas was feeling the full brunt of it. Bowelin was also fighting for his life but was managing to have some effect, as he reined down heroic blows upon his foes. Silas went down to a heavy blow, and then so did the boss. One for one, but that was not good enough. Silas on the brink of death lay desperately out of reach of the gnome, whose healing spells lacked the range required to help. Jordan, Irky and Mac all failing to land a telling blow on the hobgoblin at the door.

Bowelin then made a calculated move. With his friend about to die he would have to take a risk, even if it cost him his own life. He turned and dived backwards whilst drawing a vial of healing potion from his pocket. He landed by Silas’s side, narrowly avoiding his enemies wild swings. He unstoppered the vial and poured the liquid down Silas’s throat. Success, Silas was saved! The advancing enemy quickly attacked Bowelin again, a glancing blow almost taking him down, but he survived, and barely able to stand he turned to resume the fight. Silas also attempted to join, but heavily disorientated he crashed back to the ground.

Thankfully the rest of the group finally broke through into the room. The goblin shaman then cast its most deadly spell, inflicting a wound on Silas that sent him crashing back down into unconsciousness. Then the goblin, now finding herself alone and well outnumbered dived down the chute. Mac, free from his ineffectiveness followed her to the edge and shot down, hitting her squarely with a bolt. Bowelin did the same with an arrow, and the goblin, now dead, toppled like a stone into the darkness below.

They had all survived, but at what cost?