The citadel echoed with the distant sound of panicked goblins. The party carefully made their way back to the entrance door leading to the Kobold’s area, now intent on getting some energy back and achieving a short rest. Being well away from the goblins did not guarantee that rest would be uninterrupted though. It wasn’t long until curious kobolds, still on high alert, began knocking on the connecting door and demanded to know how it was going. Was there any news about their dragon? After being told, they appeared more unhappy as to the lack of progress, than to the news that Meatpole had been turned into an icicle. They did however agree to leave the party in peace whilst they rested. A little while later, now in better health, the group returned to the goblin quarter, only to find that the goblins has re-manned the barricade and were ready to shoot anyone coming back in.

A short but messy encounter further proved the groups awesome proficiency at range. The goblins were dead or routed.

Now, back in the goblin throne room, they stood peering down into the depths of the vine coated shaft. One-Hundred and twenty feet to the ground below, they each grabbed hold of a vine and made their way down.

Luminescent fungus, shedding violet light, clung to the walls and ceiling of a wide cavern below. The air was damp, chilly, and redolent with the odors of loam and decay. A layer of earth, mixed with rotting vegetation and the remains of cave animals, covered the floor. Several varieties of mushrooms and fungi grow on the detritus, as well as what appeared to be two planted tree saplings. There was no sign of the goblin shamen that had tumbled down here only an hour or so earlier.

Seemingly oblivious to the adventurers dangling from the vines above them, two robed skeletons tended a fungus garden, a carefully segregated area full of the most unusual varieties, using shovels and a rusted wheelbarrow to turn the soil and spread compost. Silas took a risk and dropped down into the allotment. The skeletons did not react but the tree saplings did! They pulled their roots free of the ground as their branches twisted together to form humanoid-looking bodies with a head and limbs. As the adventurers attacked, the skeletons rose up and joined the fray. Mac, his legs purposefully entwined in vines, dangled upside down and fired off an arrow into the nearest blight. The others, now keen to back up their forthright warlock companion dropped down and entered the fight. It went well, and soon they stood victorious, the once carefully ordered garden had become a broken up mess. A rough hewn cavern tunnel lead off to the north and a door was set in the northern end of the eastern wall. They chose to explore the tunnel.

It lead to rough cavern, the floor was stained and smelt of blood and animal musk. Light from glowing fungus on the walls revealed an eastern niche, which held a pallet of matted furs, a wide wooden board on which a variety of weapons were affixed, and a great cloak of patchy black fur hung on a slender pole. To the edge of the niche were two large nests made of hair, dry fungus, and refuse. Bowelin confirmed this as the Bugbear camp. Thankfully there was no bugbear, and the rats nests were similarly vacant. Someone recalled the goblins saying that the bugbear was out hunting. He would be sure to return to feed the dragon. But when? To the north Bowelin spotted further exits, the scent of the Underdark grew noxious to him. There was a place he sought never to return to.

Jordan picked up a great sword from the rack and placed it over his back. Closer inspection of the cloak revealed that it was made up of patchwork humanoid skin, areas where hair grew most thickly. A fresh potentially human scalp formed part of the trim. Disheartened by the potential demise of another of them they sought, the party returned to the central garden and went to investigate the door.

Careful examination revealed a great deal of activity inside. Carefully peaking they saw that two rows of dragon-carved marble columns marched the length of a hall, most completely covered in luminescent fungus. The cobbled floor was cracked and stained, and on it sat many small wooden tables. The contents on the tables include mortars and pestles, small tools, bowls filled with crushed leaves, chopped fungus stalks, and other plant specimens. Many doors led off this hall and were all partly open. Occasionally goblins came and went through the doors, they visited the central tables and after careful consideration took something and returned to where they came. The adventurers crept to the first of the doors. From within could be heard the sound of snoring. It was a rough barracks, and a number of goblins blissfully lay on dilapidated bunk beds. The party hatched a plan, they would sneak in and assassinate the goblins as they slept. Mac, Bowelin and Silas did the unpleasant job. Four goblins dead, minimum fuss. They edged along to the next room, within two goblin commoners repaired some dirty goblin armor with cord, iron needles, leather patches, and other crude implements of tailoring. It was becoming evident that the goblins working here were not of the fighting type. 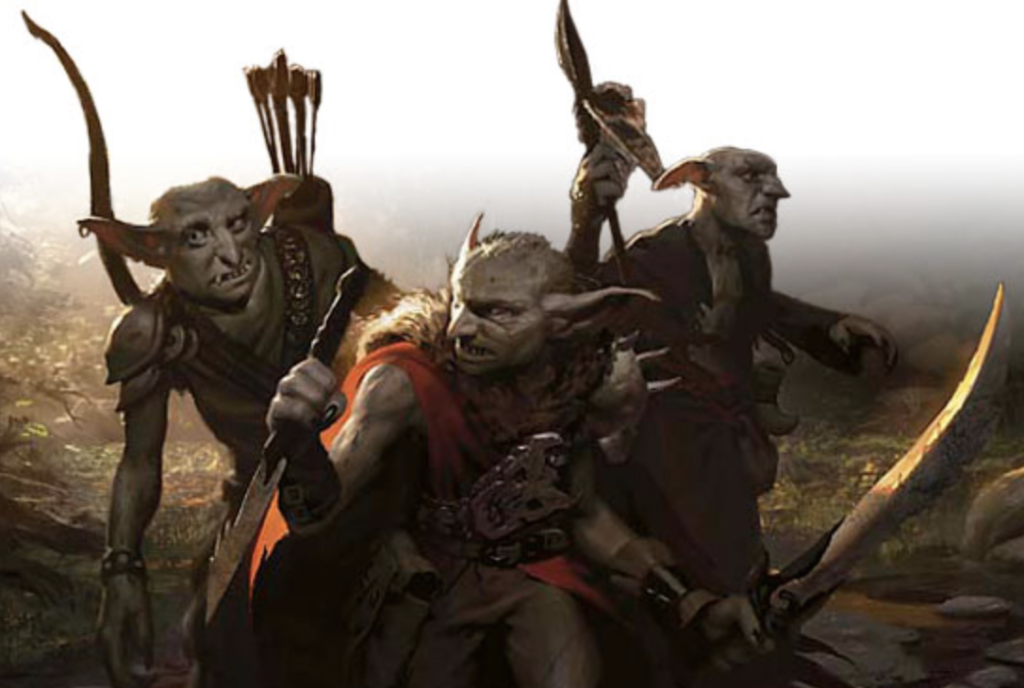 Then they were seen. A goblin commoner raised the alarm, and the place went into a panic. Out from the southern doors came warrior goblins. Little did they know the force they were up against. Jordan strode from a hidden position, across the hall. Mac caught out by Jordan’s quickness of action missed the chance to surprise, but soon found himself in the thick of it. The Laboratory became a war zone, tables and contents went flying. Goblin heads too! By the end of it the goblin commoners had surrendered and the area was under the party’s control. The other rooms revealed the true extent of the experimentation that was taking place. There was a weapons store, where some type of fungal poison was being applied to the edges of rusty scimitars. The party took all of that. In another room a diseased giant rat was strapped spread-eagled onto a wooden bench. The rat was cut open and inside it suffered from horrible tumours that looked woody and fruit-like. It was soon cremated at arms length. 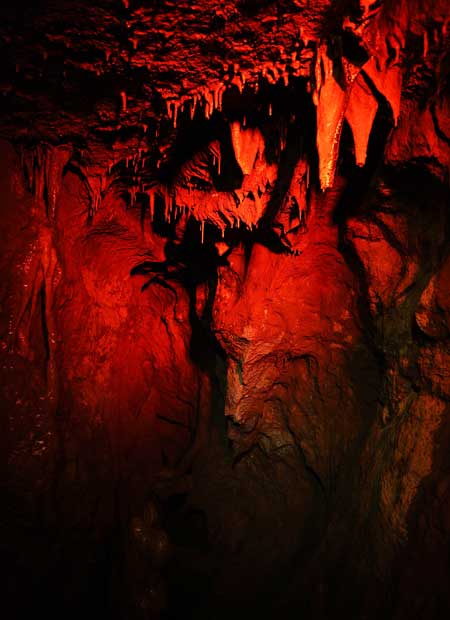 The final room revealed a gaping hole in the southern wall, which lead into what appeared to be a rift. The land had shifted and dropped revealing a debris-strewn floor two feet below that of the room. No phosphorescent fungus grew in the rift.

They decided to investigate. As they continued the rift widened. A number of two-foot-diameter holes riddled the floor, the smell of burnt earth hung in the air. Irky looked especially nervous, as he would have disappeared down a hole if he was careless. The rift widened more and entered a cavern-like chamber. The holes continued to riddle the node, now more plentiful in number, and the smell of burnt earth was almost overpowering. A dim fiery glow shone out of one such hole.

The adventurers stood staring at the glow. What would they do?