After Deliberating at worrying length on whether they should throw Irky the gnome down the glowing hole, they decided instead to let Mac look down it and see what he could find. The top of the head of a resting creature could be seen. Red and scaled, it’s slumber was soon to be broken. The party surrounded the hole, weapons at the ready and woke the creature. It was a fire snake, which wriggled up and out of the hole to it’s impending doom. Without even getting a bite at the well positioned adventures it was cut to pieces. Mac, reached down into it’s lair. The hole opened up into a resting ledge below. The snake, although a young version of whatever is was once destined to become, had still managed to aquire a small hoard. Two gleaming rubies, in amongst the charred and still hot dirt.

There was no further way forward and so the group backtracked to the passageway split by the rift. They climbed up the southern side and continued along to find a door leading to a curious and perhaps once important chamber. It was some type of old shrine, dedicated to the Dragon Cult that originally built the citadel. Faded mosaic tiles still decorated parts of the wall, but most had fallen to the dust-covered floor and shattered. Situated at the center of the chamber stood a slim pedestal of rusted iron shaped like an upright dragon. In the dragon’s mouth rested an empty tray. Once meant for an offering, it remained inert as the party tried laying the recently acquired rubies upon it. The room appeared nothing more that a curiosity and so the group retraced their steps back to the entrance shaft.

The only way forward now appeared to be into the Underdark. Not a welcome prospect, especially not for Bowelin, who had risked much and spent a great deal of time escaping from his previous life in the endless tunnels below. For him a return was out of the question, even a temporary one. He had so much to lose. The scent of the depths still irritated him. It was close, and not just that, a feeling also that they were not alone. That his brethren operated nearby. A hunch, perhaps carried on that foul air. Bowelin was relieved when the group decided to return to the upper level and see what more they could gain from the goblins. They had not yet ventured into the community area, and would now do so. Some heads may have to be cracked together, but they needed more information. Before they braved the Underdark in pursuit of the missing siblings, they would need to know that the effort was worthwhile.

They climbed back up the shaft using the thick vines. The sound of the Goblins could still be heard from behind the nearby door. They were obviously still in a state of panic. The party proceeded to open the door, however it was blocked. With the application of some strength it opened enough for Jordan to poke his head through. The goblins had piled up various things behind the door, including wagon wheels, broken armor and rusted arms, chests, small statues, antique furniture, and artwork. Inside, what might once have been a cathedral was now a goblin lair, thick with the filth of years of goblin life. Scores of wall-and floor-mounted sconces filled with violet glowing fungi provided illumination. Dozens of goblins inside were mobilised to resist. Goblin Warriors fired arrows at Jordan, but missed. He withdrew and then with a deep breath continued to force the door.

Meanwhile Silas and Bowelin crept around the corridors of the citadel to what they suspected was a second entrance to the chamber.

Jordan’s continued efforts gradually shifted the weight behind the door and with a final shove he entered the room. Inside was a scene of utter chaos, the cathedral come hovel was alive with the screams and shouts of the entire goblin community. Thirty or more goblins, mainly comprised of commoner types, including children. Four warrior goblins stood firm. That was for as long as it took for the other party members to enter by the unbarricaded side door, at which point the entire clan pathetically surrendered. One goblin, well respected amongst his peers came forward to parlay. His offer to take them down through the lower level for an audience with Belak the Druid was quickly accepted, and the group left the room, full of mightily relieved goblins, with one very nervous gobbo in tow.

Back down the shaft and into the lower level. It did not take the group losing to encounter trouble. The bugbear had returned from his hunting in the Underdark, holding two giant rats on leads. He was alarmed to see the intruders. His rage worsened as he noticed Jordan carried his pride great sword. Nothing their goblin escort could say could avert the fight. The bugbear might have hoped in hindsight to keep his temper as the party did not have too much trouble dispatching him. Emboldened by the effortless victory the group continued to be lead further into the complex. Into the laboratory area, and to a wall where to their surprise (novices) the goblin opened a secret door and they all filed through into a large network of high roofed caverns. Nodules of luminescent fungus hung from the ceiling and walls and grew in clumps on the flagstone floor. The light illuminated portions of grand bas-relief carvings on the stone walls that weren’t covered with the fungus. The carvings depicted dragons in various stages of raining fire down upon terrified people. Soil and compost covered half the chamber’s floor, which allowed a variety of feeble plants to grow. A bench containing simple gardening implements stood along the west wall. A female bugbear crouched over some weeds taking obvious care to tend them. She rose as they approached. The goblin explained the situation and she said that she would take it from here. No one mentioned the previous encounter. Most likely they had just killed her partner, but not even the goblin had the courage to impart that news. The bugbear lead them through the connecting caverns, through a side door and other areas of the citadel quite obviously being ignored by the current inhabitants, but which belonged instead to a bygone age of dragon cults.

Eventually they came to the area called the Grove Gate. Twigs and roots were piled on the floor of this sagging chamber. The collapsed southern wall opened into a vast cavern. Luminescent fungus on the rough walls and the high roof loomed over a twilight grove of sickly briars, bushes, saplings, and other woody plants. Ruined walls and hollow towers protruded from the briars. In amongst the briars movement could be seen, the shape of man twig blights going about their daily business. The bugbear said to wait, and she made her way carefully through the chamber towards the hulking shape of a giant tree in the far distance. The Gulthias tree.

Behind them in the wall was a door of peculiar quality. A newly placed and quite obviously important door. As the party waited their curiosity grew. Mac, unable to resist any more, knelt down at the lock. A challenge for sure. Click, it was unlocked, and the group went in. All but Jordan who stood outside. 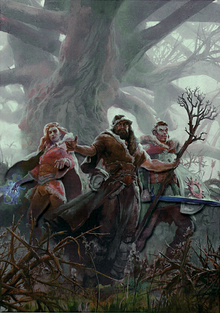 It was Belak’s study. A layer of soil covered the floor. Rough wooden shelves, filled with a scattering of tomes and scrolls, lined the north and east walls, and a rough-hewn desk stood in the center of the chamber. Fungus on the ceiling provided light, apparently in sufficient quantity to nourish several small bushes and pale saplings that grew in the soil. They began to loot. Boom. They set off an exploding glyph. Down like skittles, only Jordan unscathed. Immediately twig blights began to mass and advance from the Grove Gate brambles. A fight to death ensued. Those party members who were able to muster consciousness where quickly again felled. Until it was just Jordan, standing in among a dozen blights, swinging the great sword with all his might. A spiritual protection in place making the twig blights claws ineffective. Jordan felled the lot, until he alone stood, in the devastated room. Bowelin’s lifelessness body protruded from the chopped up pieces of twig blight. The final stand had littered the room to the extent that it began to resemble the huge Grove Gate chamber outside. After checking the other three companions, Jordan was relived to find they had all survived, but were unconscious. He would need to rest, and regain his lay on hands. That would take time. Time that was unlikely to be afforded to him.