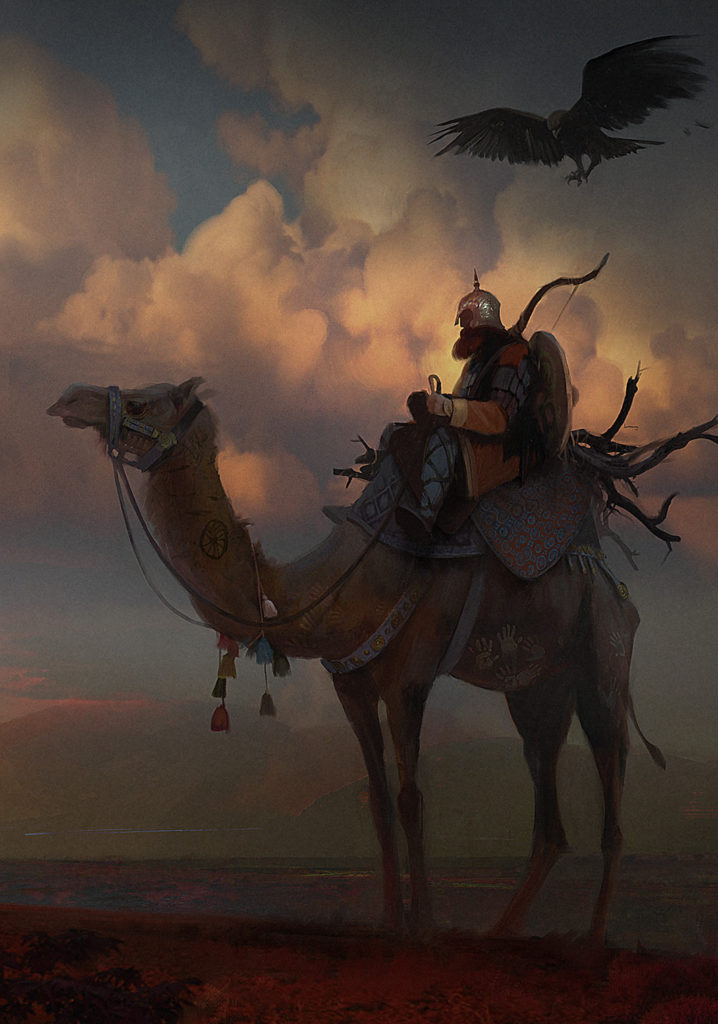 STRANGERS IN A STRANGE LAND……Appearing in a dark alleyway in an unknown arabic style city the group waste no time Lena & Storm set about securing transport, that means camels, foul stinking obstinate beasts…but enough about the party

After leaving a set of magical (cursed) armour as a deposit enough were secured to transport the group along with supplies for all. Magrat attempted to gain access to a temple in to learn of local culture & customs but after one look at the foreign unaccompanied woman with a bundle of spiked flesh in her arms the guards firmly turned her away (The bundle being a gull chick that Karvala ‘quickened’ magically) then there was Karen….who tried to purchase maps from a scroll seller, spooking him with her mannerisms & questions about unclaimed treasures, the burial places of his pharoh’s, he grabbed his stock & scarpered followed by an amazingly stealthy Karen who bopped the old man on the head & pilfered his stock, unknowingly watched by a silent observer, before making her way back to the marketplace in time to see Lena talking to patrol of knights Cappellar …the knight watchmen

all went well however with the witness to the mugging (Maimoona) reporting to her master instead of the authorities, her master, a mage of some repute & power healed the scrollseller & negotiated compensation from the party before assigning Maimoona his daughter? to offer her services as a guide/translator & so they set out NOT exploring the exotic new city or buying new & exciting things…the first day on the sands they avoid a nomad camp & that night were ambushed by undead wearing the armour of the Selentine empire (Romans) that fought using the tactics of same yet were slain all too easily by the O P group THE SANDS AWAIT…..

LET IT BEE… led to an oasis by their thirsty camels & tempted by the prospect of free freshwater our desert wanderers find a tree overhanging the pool offering pleasant shade HOWEVER an overly
large bee nest is hanging from the branches, as they party refill their bottles Storm, Karen & Azemar are investigated by curious bees each about two fists in size, one likes the smell of Storms components & clambers inside his robes, Karen sprayed hers with water angering it before she took cover in the oasis while Azemar merely activated his ring of the flaming halo instantly frying his while also rendering him immune to further attacks, Lena tried assisting Storm causing him to bee stung, Magrat was assailed by 3 more but used a psychic shield to nullify them & Maimoona used a fire arrow to destroy the nest instantly bringing the encounter to a swift conclusion with the party able to recover some wax & honey from the mess that fell into the oasis…A FEW DAYS LATER while waiting for a sandstorm to blow itself out Lena felt her camel being dragged away into the storm, confusion reigned with characters being blinded by the sand, blown off their feet & lost in the storm while Azemar used his invisible cloak which he could wrap around himself while still seeing through it & summoning rain to dampen the sandstorm for a short while followed the camel & saw it was being dragged by two winged serpents each bigger than a man, unleashing his elemental powers & aided by his ring yet again Azemar single handedly defeated BOTH the creatures until, at deaths door himself, he struggled back to the tent ro be healed by both Magrat &, eventually, Storm while Lena & Karen are both lost in the storm with Karen being blinded in her one remaining eye & crouched in despair & pain. Will Storms player finally read up on his spells & save the stragglers or leave them to be stripped to the bone by the merciless sands? find out next week in DRAGON WARRIORS 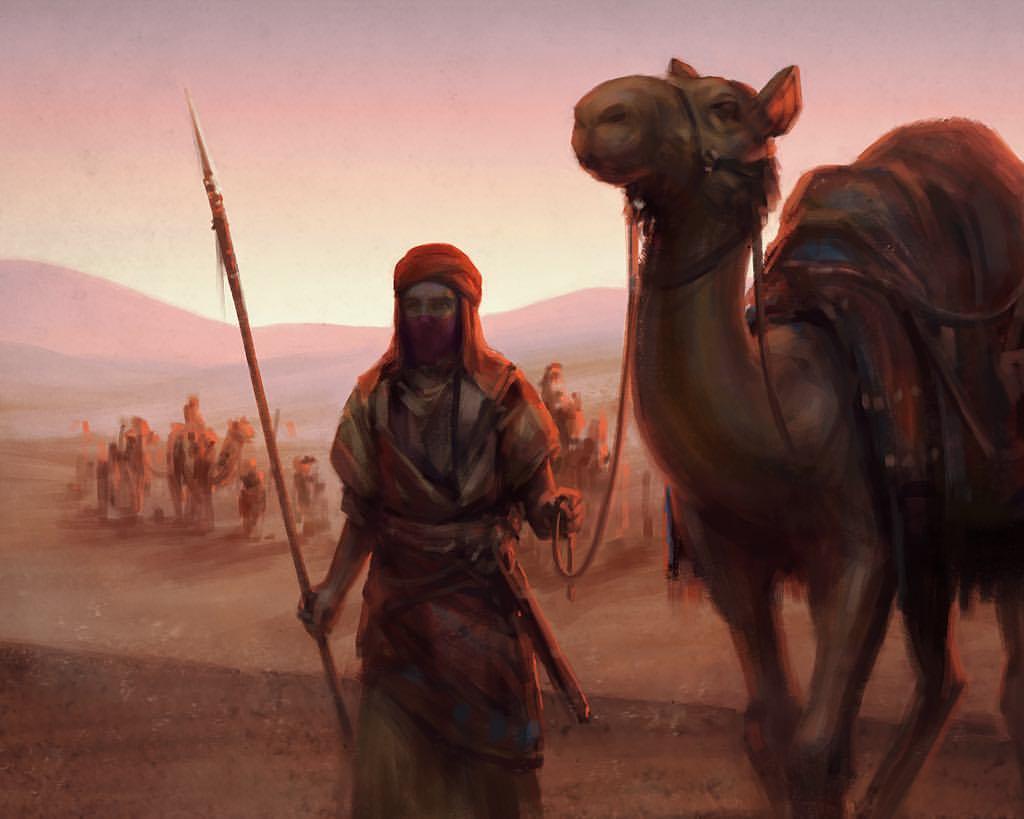 Ready to RRUUMMBBLLEE…Storm, being glove puppeted by Lena’s player, used his magics to save the day, the camel was retrieved along with Lena & Karen taking the encounter from a near TPK to super easy, barely an inconvenience. Further travel led them to a nomad encampment where they were warmly received it being the majority day of the cheiftans eldest son, celebrations were in full swing &, with the exception of Magrat who was dealing with an injured Nomad, the party were given guest rights with Maimoona being a translator being allowed to attend while Lena was expected to go to the womens tent despite the apparantly masculine barbie-barian Karen offering to pose as her husband, Lena was NOT amused!…everyone else found it funny AF. Despite the initial confusion the “ladies” managed to beat their opponents in a wrestling match, wrestling being part of the entertainment, Karen narrowly defeating the cheifs bodyguard while still posing as a man but Lena totally BLITZED her opponent who was less than happy both victor got some jewelled prizes. While the display was going on Azamar was approached by the tribes shaman who offered to train him in the ways of sandcasting (a homebrew attempt at expanding on the Raw Power ability) & after Magrat successfully healed the nomad she was gifted a box of rare herbs…with names in Chinese, what can go wrong? will there be hillarious side effects? will the blitzed opponent attempt revenge? will Karen be outed? what will be revealed…or not, next time in DRAGON WARRIORS